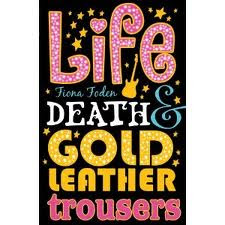 Despite having not seen her uncle Jupe, the famous former rock star, for several years after he fell out with her mother, Clover is still devastated by his death. So when her parents split up the day after she turns thirteen, and her father runs off with a nude model, she doesn't think things can get any worse. Can she cope with the fallout of the split, look after kid sister Lily, and get to know cute fellow guitarist Riley better? Or will her rival Sophie Skelling's teeny crochet bikini tempt him away from her?

This was the first I'd heard of Fiona Foden - she's a debut YA author who's written five adult novels which have passed me by - but I certainly hope it's not the last. As a former editor of Bliss, More! and Just Seventeen, she clearly knows what teens are looking for and provides it in spades with some wonderfully warm characters and brilliantly realistic relationships between Clover and her parents, their new love interests, her kid sister Lily and her first crush Riley. Then, of course, there's rock star Jupe, a haunting presence - thankfully not in a supernatural way, but just because Clover keeps being reminded of him and wishing she'd been able to say goodbye to him.

Clover is an incredibly sympathetic character and I spent the entire book desperately hoping she'd be able to both come to terms with her grief over Jupe's death and her parents' divorce and see off the challenge of Sophie Skelling - who, to be fair, is also fleshed out a bit more than most love rivals in this genre are. I found this one really heartwarming and despite it being a tiny bit predictable at times absolutely loved the ending. Foden also deals with loss and with parents breaking up with a really deft touch - acknowledging how awful both can feel while providing readers going through similar experiences with hope for the future. High recommendation and while this reads perfectly well as a 'one and done', if there is a sequel at any point, I'll be the one at the front of the crowd frantically reaching for a copy.

I'd like to thank the publishers for sending a copy to the Bookbag.
- February 17, 2012