Waiting on Wednesday: Wereworld: Shadow of the Hawk by Curtis Jobling 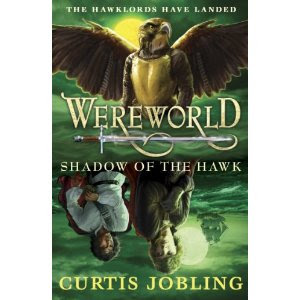 DREW FERRAN, THE RIGHTFUL KING OF WESTLAND, IS TRAPPED.

Enslaved by the Goatlord Kesslar, young werewolf Drew finds himself on the volcanic isle of Scoria, forced to fight in the arena for the Lizardlords. With the help of an unlikely ally, he must find a way to break free - but who has ever managed to escape?

Meanwhile, Hector the Wereboar flees the forces of the Catlords. Now on board the pirate ship Maelstrom, the enemy's net is closing in. Haunted by the spirits of the dead, Hector is soon left wondering who the true enemy is . . .

Book three in the Wereworld fantasy-adventure series from Curtis Jobling, the award-winning designer of Bob the Builder. Wereworld: Rise of the Wolf was shortlisted for the 2011 Waterstone's Children's Book Prize.

I love epic fantasy done well; the Wereworld series is epic fantasy done REALLY well. Drew is a fabulous central character, Hector's change over the course of book 2 was utterly gripping, and with Rage of Lions ending on such a massive cliffhanger, I need to know what happens NOW!