Saturday Spotlight is a new feature where I'm showcasing some of the books I've reviewed for The Bookbag by posting reviews here for the first time. I'm trying to use it to promote books which people may have missed originally. Like last week's, this one is more of an MG book than a YA, but I still really enjoyed it. 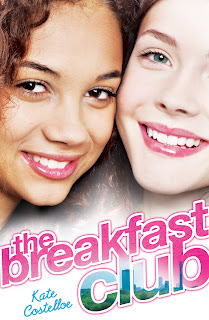 Billie and her three best friends have grown to love the breakfast club they've formed, meeting every Saturday morning to pass the time and discuss the week they've had. Mario's is the perfect venue for it - so it's a huge shock when they find it's closing down! In addition, Billie's mother is adamant that she shouldn't pursue the career in music she wants more than anything, and Billie can't understand why. Can the girls find somewhere else to spend Saturday mornings, and can they persuade Billie's mum that music is what really matters to her?

It was a really pleasant surprise to read such an engaging book by an author I'd never heard of before. Costelloe has a very easy to read writing style and I love the four characters who form the Breakfast Club. The author did a great job of fleshing them all out well - although Billie, as the central character in this one, was definitely the one I felt was best developed, the other three all came across as real individuals rather than just a stock supporting cast. I was particularly intrigued by the way two of the other girls in the club started behaving badly towards a teacher who they were jealous of and Billie's reaction to their attitude.

If there was one slight drawback to the book, I found it fairly predictable - I'd guessed the vast majority of the plot really early on. That said, I'm about three times the age of the target audience and have probably read at least ten times as many books as most people who'll read it have, so it will almost certainly be far fresher to them!

I definitely enjoyed this and would recommend it to teen or pre-teen girls looking for a light read. I'm really keen to get my hands on the second in the series when it comes out!
- January 28, 2012