Saturday Spotlight: Wereworld: Rise of the Wolf by Curtis Jobling

Okay, this feature was originally meant to spotlight books which weren't that well-known. I don't think Wereworld QUITE fits into that category, given the amount of people I've heard raving about it - but with book 3 coming out in a week's time, it seemed a good time to publish this review of the first in the series on here. 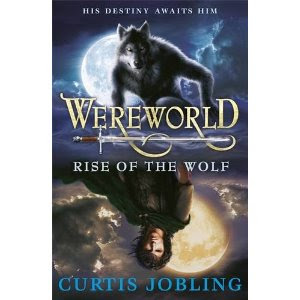 Drew Ferran knows there's a monster roaming the land where his family farm – he just doesn't realise it could be inside him. Until a terrible creature attacks his beloved mother, triggering a transformation in him, and leading his father and brother to believe he’s responsible for her death. Forced to flee to the most godforsaken parts of Lyssia, Drew becomes quickly embroiled in the world of the Werelords. Can he survive?

I've had to delete my original review of this – it was 500 words long but they were all WOW! and I didn't think it would stand much chance of being published. Having calmed down slightly from the high I was on after the incredible climax, I've tried to pick the best things about a fantastic book.

Firstly, sixteen year old Drew is a brilliant hero – an everyman who is left frantically trying to work out how he can be a werewolf without knowing it, and desperately trying to gain control over the beast within and use it to help people in a land ruled with an iron paw by the tyrannous King Leopold and his son Prince Lucas. Similarly, the villains – Leopold, Lucas, the Rat King, and various others – are pure evil, while Drew meets some engaging friends on his travels, including some of the other Werelords, caught between their natural desire for fairness and their responsibility to the people they rule over not to provoke Leopold.

Secondly, the werecreatures are fantastic – none of these lovelorn puppies imprinting on people (I’m looking at YOU Jacob Black!), but fierce fighters and valiant warriors, ranging from werebears and werefoxes to weresharks and werevermin. No mention yet of wereinsects, unless I missed it, but the boy telling Drew about the Werelords does stress that there are probably as yet unknown ones around. The world Curtis Jobling has created is deeply layered, with huge amounts of history and mythology in there and it’s incredible that there’s currently only two books confirmed in the series – surely he'll need at least a dozen to do the realm of Lyssia justice!

Finally, the amount of action in this book is incredible. There’s dramatic escapes, incredible rescues, huge battles, terrible betrayals, human sacrifices, and all of it feels perfect – everything genuinely advances the story and there’s a huge amount of character development in between the closely-packed big moments.

Incredibly highly recommended to young adult readers of 12 upwards, particularly boys – this one will get some of the guys who normally wouldn’t pick up a book if you paid them completely and utterly hooked. Here’s hoping to many more adventures in Wereworld! (From the information we find out about the fall of Wergar the Wolf king, a prequel would have me stampeding over people to get to the counter with it!)
- December 31, 2011