Saturday/Sunday Spotlight is a new feature I have planned where I'll showcase some of the books I've reviewed for The Bookbag by posting reviews here for the first time. I'm trying to use it to promote books which people may have missed originally - we start off with a fabulous one, which won my YA Oscar for Best Male Character in a Leading Role. 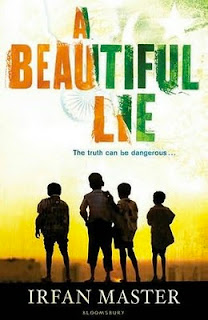 Bedridden with cancer, Bilal's bapuji, or father, doesn't realise how far the plan for the Partition of India has progressed. Bilal has kept the news from him as he was worried that it would kill him – but when he accepts that death is imminent, Bilal swears to at least save him the pain of having his heart broken before he passes away. Along with his friends Chota, Manjeet and Saleem, Bilal swears to stop him from ever finding out. 1947 India, though, is a dangerous place for everyone, and there are people in their town who don't think that Muslims, Sikhs and Hindus should be doing anything together.

This novel manages to be utterly charming and seriously exciting at the same time. The friendship between the four boys, and the love Bilal has for his father, are beautifully portrayed and there are some thrilling sequences as the situation gets ever tenser approaching the day of Partition and arguments between the different religious groups more and more violent. All of the characters – from the main group of children, to Bilal's teacher, the town doctor, Bilal's older brother, and the local printer – are wonderfully well-rounded creations and even though he appears on relatively few pages, Bilal's bapuji is someone who feels truly real because of the way the other characters talk about him.

It's not an easy read by any means – there are some violent scenes, especially one where Bilal and Doctorji are confronted by men who accuse them of being spies, and another where the boys watch a brutal cockfight. It's extremely thought provoking, raising the question of whether Bilal is right to lie to his bapuji to protect him, or whether the dying man deserves to be told the truth even if it will hurt him. The book also does a brilliant job of evoking 1940's India, an unusual setting for a young adult novel, and really increased my interest in this time period.

As coming of age stories go, this is extremely strong and debut author Irfan Master has definitely catapulted himself straight onto my list of novelists to keep a close eye on.
- December 24, 2011