Monday Musings: Review of The Clever One by Helena Close 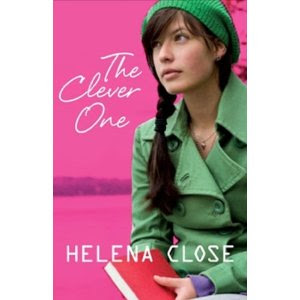 Sixteen year old Maeve is the clever one in her family. So clever that she can't believe how stupid the others can be - especially her slightly older sister Fiona, a 'pramface' now after falling pregnant to her no good boyfriend Big. After the news broke of Fiona's pregnancy, Maeve told her best friend Mark that she wanted nothing to do with the baby. But she didn't count on loving baby Harvey so much that she'd do anything to protect him - so she sets a plan in motion to rid their family of Big and the rest of the scumbags he associates with.

Author Helena Close has created a memorable, if not necessarily likeable, heroine in Maeve, and depicts Limerick in a realistic and gritty manner. It's definitely not one for younger teens - one of the very first scenes sees Maeve throw up over a boy who's trying to force her to go further than she wants with him, and that quickly seems incredibly tame compared to some of the later events in the novel. That said, none of the events seem to be there just to shock - they're believable consequences of Maeve’s actions, and we can see how quickly events can spiral out of control.

I found parts of the book to be rather predictable – particularly the romantic subplot between Maeve and Mark – while others, especially the ending, took me completely by surprise. I’d hesitate to call this a particularly enjoyable read; the bleakness of the subject matter makes that description rather inappropriate. It is, though, a very powerful novel and definitely worth reading if you want a gritty and realistic drama. I’ll just repeat once more my warning that this is for more mature teens only!

Overall, this is a well-written tale with some excellent characters, and I look forward to reading more from Helena Close in the future.
- December 26, 2011