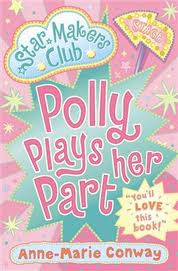 This is the second in the Star Makers series, fairly major spoilers for the original Phoebe Finds Her Voice included. You have been warned!

Polly Conway is having to deal with rather a lot at the moment. Her mum has got a fabulous new job – but it’s in Spain! That leaves Polly to live with her dad, her new stepmother who she can’t stand, and her baby brother who’s just annoying. Depressed by the problems in her life, she ignores her dad’s rules and turns to the friend2friend website to find comfort. As she gets increasingly addicted to the site, she starts to lose focus on the important things in her life – including her family and the Star Makers’ new production.

Minor gripe to start off with – this is book 2 in the series and follows on from book 1 in which, as far as I can tell, Polly was bullying her now best friend Phoebe. There’s nothing obvious to state it’s the second in the sequence and I have to admit I’d have given it a miss and waited to read the first one if I’d realised.

That said, I’m still glad I picked this one up from the library as it’s a breezy read with some surprisingly well-developed characters compared to most books aimed at this age range. I really liked Polly’s stepmother Diane in particular, as she tried to get to know Polly better and help her settle in despite her ingratitude, and found Polly herself a great narrator – some of her actions were infuriating but in a completely realistic way.

Full marks to Anne-Marie Conway as well for the way in which she handled the friend2friend storyline – I thought I knew exactly what would happen here but I was significantly off target with my guess. I’ll avoid any spoilers, but thought it added a lot to the book to show a rather less publicised danger on the internet.

Finally, I thought it was really refreshing to find a book which had such well-rounded supporting characters. The clownish Monty, the supportive Phoebe, and the rest of the drama group all seemed very well developed and I look forward to reading more of their stories.

High recommendation to its target audience of girls in or approaching their early teens.
- August 04, 2011