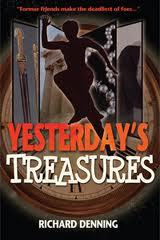 Many thanks go to Richard Denning for providing me with my copy of YT in exchange for a fair and honest review.

Set shortly after the events of Tomorrow’s Guardian which saw young hero Tom accept his mantle as a Walker who could travel through time, and rescue several others with similar gifts, Yesterday’s Treasures sees Tom and his friends searching for the legendary Crown of Knossos. Up against them are their old enemies from the Twisted Reality, and even the Directorate may have their own reasons for wanting the Crown…

That paragraph above probably makes very little sense if you haven’t read TG, so if you haven’t, go get that book first! Then come back here…

Like the first in the series, I really enjoyed Yesterday’s Treasures. Denning’s writing is very accessible to readers, he fleshes out his characters well – there’s certainly more ‘shades of grey’ here than could be found in the first book which was far more of a straightforward goodies/baddies kind of novel – and he does a great job of capturing the voices of people from different time periods. (I particularly like the interaction between modern schoolboy Tom and former 17th century servant girl Mary, who continually calls him ‘Master’ despite his efforts to get her to stop.)

That said there were a couple of things which I thought let the book down at times – the tagline ‘‘Former friends make the deadliest of foes’’ commits the cardinal sin of giving too much away as we’re waiting for one of Tom’s allies to betray him. Denning does, to be fair, do a pretty good job of building up several characters as the possible traitor but it still felt like we were finding out too much about the novel before reading it.

I will also cheerfully admit to having problems following complicated time travel at times and one reason I enjoyed Tomorrow’s Guardian so much was that it was blissfully UNcomplicated – concentrating strongly on the action parts and much less on the mechanics of time travel and the usual ‘’what if I meet myself’’ questions was a great decision by Denning in my opinion. This is noticeably more complicated and that lessened my enjoyment at times (but to be fair I’m sure most older primary-school kids will be better at keeping up to speed than I am, as I’ve said, I struggle with complex stuff!)

With those slight concerns I would happily give this a good recommendation – it’s exciting, it’s got a great cast, it tells an interesting story and the character development shows a lot of progression from the first in the series.

If you like the sound of the book but aren’t 100% sure whether to try it or not I’d strongly encourage checking out Richard’s superb website where you can read the first five chapters for free!

There’s also a long extract from the start of the first in the series, Tomorrow’s Guardian available - great to see an author with so much confidence in his work that he’s willing to let people have a decent sized chunk as a taster.

Finally, Richard was kind enough to do an interview for this blog which you can find here if you'd like to learn more about him and his books.
- April 13, 2011