Monday Musings: Review of You Against Me by Jenny Downham 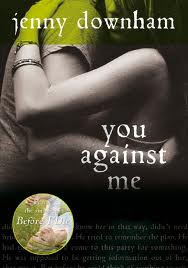 Karyn liked Tom. So much so that she went round to his house looking sexy. But no-one really knows what that led to. Now she’s claiming he raped her, Karyn’s brother Mikey wants to kill him, and Tom’s sister Ellie’s world’s falling apart over the allegation. And then Mikey and Ellie meet and things get REALLY complicated. So begins an intense, and complicated, look at loyalty, love and the quest for the truth...

I picked this up because Downham’s Before I Die is one of my favourite books of the past decade. While this didn’t hit me quite as hard as that superb novel did, she’s an author I’d definitely consider to be one of the very best of today’s many excellent YA writers. She builds suspense really well here as it takes a long time until we find out the truth about the night of the possible rape, causing me to race through a fairly long book in less than a day because I was so desperate to find out what happened.

There’s also some marvelous characterisation – I really like both Ellie and Mikey who are very realistic, both doing some stupid but understandable things, as Ellie’s faced with a father who’s refusal to even imagine Tom could be guilty is quite scary, while Mikey has to try and look after Karyn, who won’t go outside, their mother who’s turned to drink, and kid sister Holly. Karyn and Tom themselves were rather more mysterious but in many ways had to be to keep the mystery up, while minor character Gillian – a policewoman assigned to Karyn – stood out for me as a fairly rare sympathetic authority figure in modern YA. Dialogue is another really strong point, with all of the characters having distinctive voices which suited them perfectly.

It’s not perfect as a novel – the writing is, perhaps because of the difference in subjects, far less lyrical than Before I Die was, and without wanting to give anything away about the ending I felt it was a little bit underwhelming. Also, the themes mean I’d be slightly uncomfortable recommending it to younger teens to be honest. However, it’s a very good read.which confirms Downham’s place as a fantastic author.
- April 11, 2011