Monday Musings - Review of The Hunger Games by Suzanne Collins 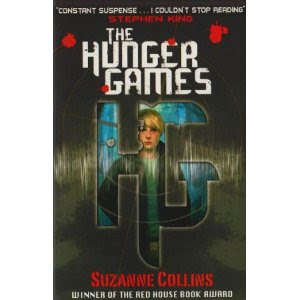 In a dystopian society, the people of Padem for the main part live in abject poverty, forced to pay for the Districts' long-ago revolt against the Capitol by offering up a yearly sacrifice of a boy and a girl for the Hunger Games - a kill or be killed televised event in which 23 children will die but one will emerge victorious. Into this horrific spectacle steps Katniss Everdeen, one of the most resourceful and fiery heroines of recent years in YA fiction, as she volunteers to replace her younger sister when Prim is chosen by lottery to be the tribue from District 12, the weakest of the Districts. Can she overcome all of the odds to survive?

Collins' writing is fast and furious here, and while there's nothing particularly original - the story could be described as Theseus meets Lord of the Flies meets the Running Man meets Big Brother, with the latter becoming particularly prominent as Katniss learns to play for the camera to increase her chances of survival. That said, the author's style is engaging and exciting enough to carry it off and several characters - notably Katniss herself and 12 year old Rue, who becomes an ally during the Games - stand out as richly detailed creations.

There's the by now standard love triangle for YA fiction, as the other District 12 tribute Peeta declares his love for Katniss live on TV on the way into the Games, while back at home there's the smouldering Gale, who has been her hunting parnter for years. It's pretty well-handled without really living up to the excitement of the rest of the book, and the growing relationship between Katniss and Peeta despite their knowledge that only one of them can win the Games develops well.

As a start to a trilogy this is superb, with an ending which immediately had me salivating over the chance to read sequel Catching Fire (review hopefully up next week!) and I'd have no hesitation to recommend it - with the slight warning that, as you'd expect from the subject matter, there's some seriously brutal stuff in here and younger or easily disturbed viewers may wish to steer clear for now. (On that subject, good luck to the film makers on dealing with some of these deaths in a way that isn't going to get them an 18 rating - they'll need it!)
- March 21, 2011