Apologies for the week off, personal stuff crept up on me...

REALLY excited by this comeback post though - an interview with Jon Mayhew, author of Mortlock and the Demon Collector. I've just finished TDC and a review should be at the Bookbag in the next few days - suffice to say I wasn't disappointed! Many thanks to Jon for doing this interview and for responding to my questions with some really in-depth answers at lightning speed, especially compared to the time it took me to write them! 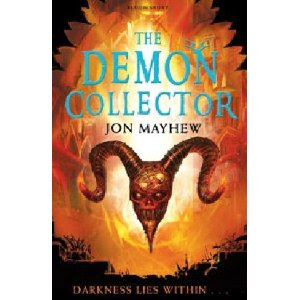 When you close your eyes and imagine your readers, what do you see?

I see a kind of conglomerate of my four children, they range in age from 10 to 17, boys and girls. I think I also see myself as a child too. But when I write, I tend to write for myself!


Which book would you recommend to people who enjoy The Demon Collector while they're eagerly waiting for your next novel?

Mortlock if they haven’t read it! But self-interest aside, Dead of Winter by Chris Priestley and his Tales of Terror series, The Black Book of Secrets and the others in F E Higgins’s series, Oh, anything by Marcus Sedgewick, The Dead by David Gatward or The Bili SanGreal books by Sarwat Chadda.


Have you ever thought about collaborating with another author on a novel? If so, who would be your dream writing partner? (Alive or dead, I'm feeling generous!)

You’re too kind! I’d love to brainstorm ideas with David Almond or Eoin Colfer. I think Mr Colfer would be fun to work with. As would Marcus Sedgewick, I love White Crow and it’s modern interpretation of the Gothic. I suspect though that many writers are a bit like me in that they quite like to work alone, so it may not work. Writers from the past? They’d probably have me burnt at thestake for my heretical thoughts.


What advice would you give to authors just starting out?

I’m wary of giving advice but I think the one thing I would say is write the book you’d love to read. Enjoy writing it. I could be wrong but I get the impression that if you try to write ‘the next big thing’ you’ll spend half your life trying to second guess the markets and the other half miserable and not enjoying your writing. Pointless.


As a fellow massive folk music fan, I love the atmospheric lyrics scattered throughout your two books so far. Any particular folk artists you'd recommend to your readers? And, if I can sneak in anextra question, do you listen to music when you write?

An album called Castabell by a trio called 1651 had a huge influence on Mortlock, it’s a dark and mysterious take on Playford’s Dancing Master. It sends shivers down my spine. Alva’s take on Long Lankin gives me bad dreams. A lot of Martin Carthy’s music inspires me, his version of Scarborough Fair with Chris Wood and Roger Wilson (Wood Wilson and Carthy) was part of the inspiration for The Demon Collector. He actually makes the song sound sinister! I also love Faustus and Maclaine Colston and Saul Rose. In answer to the sneaky extra question is partly all of the above with a healthy dollop of The Sisters of Mercy, Hawkwind, Steppenwolf, The Pogues and the sound tracks to many, many horror films!

I would ask Louis Sachar how he plans his stories. There must be a secret to crafting such clever, twisty, turny plots that look so simple. Maybe it’s just genius though!


Who’s your favourite character in the Demon Collector?

Hmm, could be Henry the Jack Russell (I have two myself) or maybe Slouch, the butler who is a demon of sloth and can’t be bothered doing anything for the professors of the Royal Society of Daemonologie. I think I’d have to plump for Salome, the fun-loving demon-queen who’s so unstable, giggly and lethal.


What are you reading now?

The Thin Executioner by Darren Shan. It’s nice to read a standalone by Shan the man and I’m enjoying it!


Between Blogspot, your website, the Mortlock website and Gory Stories
you have an incredible web presence! How important do you think it is
in this day and age for YA authors to communicate with their fans over the internet?

I’m not sure that it’s always important. I like to find out about and link up with authors and I know a lot of younger readers do too. But it doesn’t always matter. F E Higgins keeps a very low internet profile but seems to be popular.

I like the connection the internet gives you with your readers. It’s great to read a review on a blog and to find out it’s been written by a 14 year old boy in Melbourne! I have a facebook fan page too but don’t twitter as much as I’d like!

I also think it’s a great vehicle for giving something back, hence the free Mortlock short stories between Jan 2011 and April 2011 downloadable from www.mortlockdemon.com


What's next for Jon Mayhew?

In the short term, a cup of tea and the news on TV. In the long term, the short stories are keeping me busy, Bloomsbury have created PDFs in the same font and layout as the Mortlock and Demon Collector books so it looks superb! Book 3 should be out in 2012 and, at the moment it’s called The Bonehill Curse. I don’t think that’ll change but it is sitting on my lovely editors desk as I type! More of that in the future!

Certainly looking forward to reading it Jon! Thanks again for the interview.
- February 14, 2011