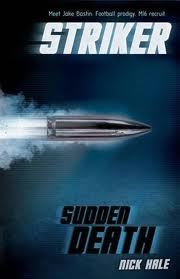 One of the most action-packed books of the year, for me, was the impressive first entry into the Striker series following former international footballer Steve Bastin's teenage son Jake as he investigates a series of mysterious deaths. Perfect for youngsters who enjoy football, this is one that will get reluctant readers drawn in.

My full review, reposted below, was first published on http://www.thebookbag.co.uk (and was provided to me via The Bookbag by the publishers in exchange for a fair and honest review.)

Jake Bastin, son of famous former footballer Steve, thought his life was difficult enough even before his father enters negotiations to join St Petersburg’s newest football team as manager. But when the agent his dad’s discussing the move with collapses of a suspected heart attack, things get far more complicated – because Jake is convinced he was actually poisoned, and can’t understand why his dad seems happy to go along with a cover up. As the pair move to St Petersburg, the bodies start piling up, and Jake goes from having to fight to control his temper, to fight to save his life. With no way of knowing if he can trust anyone, even his own father, can the youngster stand up to criminals who are happy to kill to get what they want?

From reading the blurb about this book, I was expecting half Alex Rider, half Mark Fox (main character in a Michael Hardcastle series of football books in the late seventies and early eighties.) What we actually get is much more action-orientated than I was expecting, with Jake’s own football prowess taking a definite back seat to his growth as an action hero. Still, that’s certainly not a criticism – just an observation – and this fast moving thriller had me hooked from start to finish! Jake is a brilliant hero, likeable and well-developed, and the other characters are really interestingly drawn. I had no idea, when I was two thirds of the way through, who would turn out to be a good guy and who would turn out to be a criminal, but the eventual explanations made perfect sense and tied things up nicely.

Author Nick Hale has got a clear, crisp, writing style and fits a huge amount of action into the book with lots of cliffhangers – I found it practically impossible to put down and I’m sure most teenage boys, the main target audience, will be equally gripped! I was also impressed that the violence was reasonably restrained in the way it’s described – despite the deaths and fight scenes, there’s nothing much here I’d be hesitant about passing on to a young secondary school pupil. I hope this is the start of a long-running series and would highly recommend it to fans of Anthony Horowitz, Robert Muchamore, and Mal Peet. The second in the series, Close Range, is out now, and I have it on my to be read pile so will try to review it once I get around to it.
- January 06, 2011