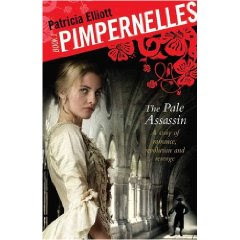 With France in the grip of the Revolution, aristocrats certainly aren't safe there - especially when their brothers have been involved in trying to rescue the royal family. Eugenie de Boncoeur is forced to flee her sheltered life to try and escape from both the revolutionary mob and the mysterious pale assassin.

Okay, first comment on this book is that I love the cover - mysterious shadowy figure in the background, beautiful girl at the front, ornate building - awesome, and immediately made me feel like I was transported to 18th century France. The writing kept me there, with Elliott setting the scene really well in the first few chapters and providing really good background information to compensate for my lack of any real knowledge on the Revolution.

At some point reasonably early on in a novel, things need to happen, yeah? And they just didn't, for far too long. We had lots and lots of worried aristocrats plotting, and Eugenie hiding away and being scared by the poor people revolting... but just not much actual action until quite late on in the book. When we DID get the action, to be fair, it was really good and Eugenie was a likeable heroine who used her quick wits to good effect. I just wish we hadn't taken so long to get there in the first place. Characters are pretty good generally with Hortense, Eugenie's governess, being particularly interesting.

While I wasn't overly impressed, to be honest - I think I'd have enjoyed it more if it was 100 or so pages less - and would almost certainly not reread the book, the ending was very enjoyable and it's got me really interested in reading book 2, The Traitor's Smile. So it's not a particularly high recommendation as a book but it may well be the start of a really good series, if you see what I mean.

Mild recommendation to fans of Celia Rees and Libba Bray, and anyone wanting to find out more about the French Revolution.
- January 04, 2011