Book Review of The Sky Is Everywhere by Jandy Nelson 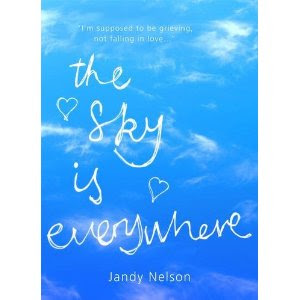 ‘There were once two sisters who were not afraid of the dark because the dark was full of the others voice around the room...’

But now there’s only one, because 19 year old Bailey has died and her 17 year old sister Lennie is left alone in her grief, apart from her Gram and Uncle Big.

‘What happens to a stupid companion pony if the racehorse dies?’

Shattered by her sister’s sudden passing, the only person Lennie feels she can turn to is Bailey’s boyfriend Toby. And then the unthinkable happens and they kiss...

‘What if music is what escapes when a heart breaks?’

Arriving into this mess is the gorgeous newcomer to school, Joe Fontaine. From the moment Lennie meets him at band practice there’s instant electricity between them, and after never having anyone special in her life, Lennie is irresistibly drawn to two different boys. Can she go on with her life without Bailey to lead the way?

This is breathtakingly, incredibly, heartbreakingly beautiful. Debut author Jandy Nelson – how can anyone be this talented when writing their first novel? – creates a cast of compelling characters and manages to make Toby and Lennie so sympathetic that what seemed to be a rather unlikely love triangle works surprisingly well. I read through the entire book in a three hour train journey, stopping only for ten minutes to tear myself away before I burst into tears at Lennie’s grief. (This worked originally but by the end I was crying anyway!)

I loved the setting of the book in Clover, a town where Lennie’s Gram, before Bailey’s death, used to walk around with shears pruning people’s flowers, and Uncle Big routinely has women climbing up trees to spend time with him, and a music teacher will march his band out into the woods to play. This could have been really jarring with the overall themes of loss and grief but instead provides a welcome gentle touch in comparison with the heavier parts of the book.

And then there’s the poems! At either the start or end of nearly every chapter, Nelson provides us with a poem written by Lennie. Written on paper cups, on scraps of paper, or carved into trees or benches, they are presented beautifully and make this a book that’s not just gorgeously written but absolutely breathtaking to look at. I’ll almost certainly buy a second copy of this one, because it’s too wonderful NOT to lend to people but I want to keep it in its pristine condition for as long as possible.

Very highest recommendation to pretty much everyone in the entire universe but particularly fans of Lauren Oliver, Jenny Downham and Francesca Lia Block. This is my favourite book of the year.
- December 29, 2010