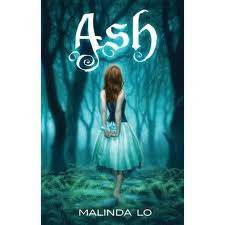 Left at her cruel stepmother's mercy after her father's death, Ash starts to ignore her mother's old warnings about the fairies. Surely nothing could be worse than the life she has now? Perhaps being stolen away by the dark and dangerous fairy Sidhean wouldn't be such a bad thing? And then she meets the King's Huntress, Kaisa, and realises that maybe there is a place for her in the real world, away from both her stepmother AND the fairies. Who will she choose, Sidhean or Kaisa? In case you hadn't guessed, this is Cinderella with a lesbian twist...

Well, as love triangles go, girl, male fairy, and huntress is fairly unique. And full marks for it not being spelt faerie, which I'm starting to get an unreasonable dislike for for some reason. Also, while this is Lo's debut novel, it's clear from reading this book that she's a major talent. In particular, her writing style is gorgeous - elegant without being over the top, and her description of the first hunt Ash goes on with Kaisa is particularly well-written. Having said that, I have to admit the book didn't grab me in the way that my favourite books do, possibly because I thought Ash was a fairly bland focus for the novel herself and that some of the others weren't really that well developed. Kaisa, a complex character who takes her role as Huntress very seriously despite the emotions it awakens in her, is an honourable exception to this, as is Clara, the younger and nicer of Ash's stepsisters, who I'd love to have read more about. I did think the lesbian relationship between Kaisa and Ash was really well-handled, as well - it never came across as being added in for shock value, it felt completely natural.

Next up for Lo is Huntress, a prequel to Ash – will give that a try and hope that I’m more convinced by the characters this time.
- December 27, 2010