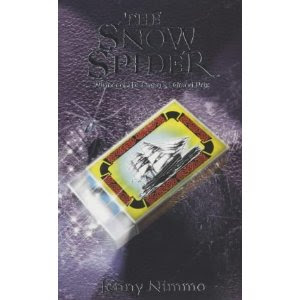 Young Gwyn's world has been lonely since the disappearance of his sister Bethan. His parents, particularly his father, are still grieving and his father blames Gwyn for his sister's loss. On his ninth birthday, though, his life takes a strange turn as his nain (grandmother) gives him five gifts and tells him that now is the time to find out if he's a magician. One of the gifts, a brooch, is tossed into the wind and becomes Arianwen, the snow spider. And so begins a journey which could finally heal the wounds at the heart of Gwyn's family...

It's years since I've read any of the Magician Trilogy, and this first in particular was one of my favourite ever books as a youngster growing up in North Wales. After mentioning it in a post earlier today, I stumbled across it in my bedroom and took that as a sign to reread it to see if it was as good as I remembered - and while I was surprised by parts of it, I certainly wasn't disappointed.

One of the surprising things about it was just how short it was - at under 150 pages, I read through it incredibly quickly - while another was that, in the end, it's not really about the magic. It's a deep tale of grief, of longing to say goodbye, and eventually of healing. It's very different from Nimmo's later Charlie Bone series, which most YA's today will be far more familiar with, being shorter and with slightly less developed characters, but it's just as enchanting in its own way. It also has one of the sweetest endings I can ever remember reading.

I'll try and review the sequels at some point, although I'll need to find them to reread them first - but trust me when I say it's well worth getting the trilogy, which is available from Amazon for just £4.49 at the moment. From what I remember the TV series, starring Sian Phillips as Nain, was also well worth getting but is sadly unavailable on DVD today.