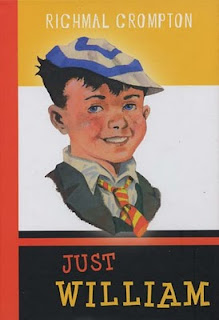 Whether it's a trip to the cinema, babysitting a youngster, being a page boy at a wedding, or running away from home to take a job below stairs, the 11-year old William Brown can always be relied on to create chaos and havoc wherever he goes. This short story collection (the first of 38 books) is a wonderful introduction to a classic character.

Having originally read the books perhaps 20 years ago, I picked up the boxed set of the first 10 of them at a bargain price (sadly no longer available) earlier this year but hadn't got round to opening it until earlier today due to a rather large backlog of books. Partly due to the upcoming TV series, I finally found the time to reread Just William today, and was immediately transported back to England in the 1920's. Crompton was brilliant at creating richly comic characters - notably William's older brother and sister, Robert and Ethel, along with the girl-next-door Joan and, of course, the scruffy, unkempt, hilarious title character himself. While I'd remembered the characters fondly, especially the dialogue (and William's habit of overriding objections with something rather unrelated followed by a sarcastic"I'm simply statin' a fact", or similar, which would probably make him fit right in as a modern teenager!) I'm not sure I ever appreciated as a child just how good Crompton's narration was. (A sample, on a rat that William's Outlaws have painted for a show they're holding. "It wore a bewildered expression, and occasionally licked its stripes, then obviously wished it hadn't.")

My childhood memories of the William books are that they were rather hit or miss - although I enjoyed them, I was always more of a Jennings fan myself. I'm not sure whether the series quality perhaps decreased later on, or whether I've been doing them a disservice, but this is definitely far more hit than miss. Particular stand outs are 'William the Intruder', in which William falls in love with the same girl as his brother Robert, 'The Show', which has the first of many hilarious moments from Mr Brown to round off an excellent story, and the first ever story 'The Outlaws', which sees William forced to look after a baby which he tells the rest of the Outlaws he's kidnapped in order to save face. Of course, things don't go according to plan in any of them, although there are a nice mixture of moments of triumph and despair for the youngster.

37 sequels so plenty to find if you're looking for more - the boxed set is well worth picking up if it becomes available again; my personal favourite in childhood were always the World War II books, which start with William and Air Raid Precuations and run through to William and the Brains Trust.

More information and a complete list of books can be found at http://just-william.net/richmal-crompton.php